Thank you to Patriot Point, Operation Surf, Warrior Canine Solution, Fisher House Foundation and Warrior Foundation Freedom Station for all you do to support our warriors!

Zach Martinez entered the Navy on 12.29.1966 and served in the Vietnam War. He was Honorably Discharged on 9.25.1970. He leaves behind his beautiful wife of 50 years, Alberto and three children: Zach Jr., Magic and Edmond.

His work and vision of Patriot Point will continue.

A service at Patriot Point is scheduled for July 16th at 11am.

A certified chaplain who offered free counseling to our veterans that suffer from Post Traumatic Stress Disorder, ZACH is what they call the “Real Deal.” We shall miss him dearly. His love of Country, men & woman of the Services, Veterans,family & friends as well as complete strangers, will be part of a legacy that will forever be etched within our hearts. RIP 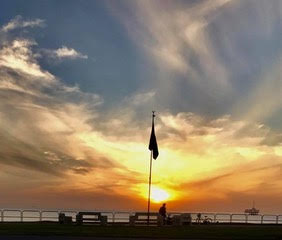 Seacliff Tee It Up For The Troops directors Mark and Leslie Mayes hosted a beautiful reception at Seacliff Country Club introducing each beneficiary as the run up towards this years 7th Annual Golf Tournament is now in full swing.

About SeaCliff Tee It Up for the Troops

HUNTINGTON BEACH, California (July 2015) – The waves are head high, glassy, skies are a sunny California blue and surfers routinely climb up and down The Cliffs at Goldenwest and Pacific Coast Highway. Meanwhile, a waving American flag stands strong at its post greeting beachgoers, runners and bicyclists passing by.

Not just an ordinary flag. A family from out of town admires the landmark and asks a stranger to take a photo. A woman runs by and honors the husband she lost in Afghanistan. A motorcyclist salutes the flag, kneels down, lays his head on the post and cries for his lost brothers.

The man behind this all is a local chaplain, Zach Martinez. He calls this sanctuary Patriot Point, founded Memorial Day of 2010. Martinez changes the flag every three weeks, and has upheld this memorial for five years out of his own pocket. Martinez also councils veterans coping with PTSD and brings them down to the Point to meditate.

Five years later , the vision has finally been put into perspective. President of Seacliff Tee It Up for the Troops, Mark Mayes, and Martinez shake hands, shed tears and hug as they join together with the same mission to make this memorial a permanent place.

From August 22-24 SeaCliff Tee It Up for the Troops will be hosting fundraising events at SeaCliff Country Club in Huntington Beach, California. Festivities include a Mixed Doubles Tennis Tournament, Raise It Up For the Troops party open to the public, Golf Tournament and live auction. Auction items include a five day vacation package to Hawaii and floor seats to the Laker game. Phillip Palmer, weekday morning anchor for ABC7 Eyewitness news, will be a featured Master of Ceremonies.

Proceeds will benefit the Fisher House, Vision2Victory, Freedom Station and Patriot Point. Since 2012, SeaCliff Tee It Up for the Troops has raised over $525,000, as a way to give back to those who have put their lives on the line for our country.

About SeaCliff Tee It Up for the Troops

For event information or how to get involved, please visit seacliffteeitup.org.