Together we make a difference and this year was proof! A grateful THANK YOU to all who worked tirelessly to make this happen! We can’t wait to see what this next year brings!

Congratulations to National Tee It Up for the Troops on your wonderful 2019 REUNION event and THANK YOU for sharing with us locally!

REUNION is a Tee It Up for the Troops outreach program that reunites combat Veterans and their caregivers in a safe and secure environment. Attendees experience brotherhood and camaraderie that they long for after serving. They also share their triumphs and challenges and help each other to find ways to keep moving forward in life.

We hope you enjoy these REUNION highlights, including the short video below!

Why are the events held at SeaCliff Country Club so successful? Well, like all great events, the people involved make the difference…but SeaCliff has another secret to share.  In addition to hitting golf balls in support of military troops and their families, they hit and serve up tennis balls in gratitude and appreciation for the sacrifices made by our bravest. SeaCliff’s Serve It Up for the Troops is the first and, so far, only tennis tournament raising funds for Tee It Up for the Troops nationally. The 2018 tennis tournament aced over $123,000!

The first Serve It Up for the Troops tournament at SeaCliff was held in 2013 with about 25 players and $5,000 being raised. Last year, 138 players participated in the two-day mixed doubles tournament with a 20-fold increase in profit, making SeaCliff’s tennis tournament one of the top fundraising events overall for Tee It Up for the Troops. Kristi Serrano, Chairperson for SeaCliff Serve It Up for the Troops, says this is the biggest tennis tournament in Huntington Beach and draws players from all over Orange County. “There are lots of people who aren’t golfers that want to participate and support our military, and this gives them another option. We also have some community members that play in both the tennis and golf events.”

Serve It Up for the Troops festivities included an inspirational exhibition match featuring wheelchair-bound veterans playing against high level players, a Raise It Up for the Troops party and dinner held on the main court, silent and live auction, live band and dancing. Around 300 people attended the beautiful, sit down dinner event.

planned on can’t make the event. “So, I called in the Marines and like true Marines, they came through and pointed me towards Derek Herrera from the Marine Raider Foundation,” Kristi explained.  Captain Derek Herrera, a Marine paralyzed from the chest down by a sniper in Afghanistan and

Purple Heart and Bronze Star for bravery recipient, became the honored guest speaker.  Kristi says people were blown away with Derek’s moving talk, wiping tears away, and wanting to donate more money. “This is why we are all here. As a former military wife with a child, I know how hard it is for our soldiers and their families to be separated by time and countries, not to mention the injuries many sustain.  I urge everyone to get involved … we can never have enough volunteers. Start a Serve It Up event in your community. After Derek spoke, I said I am ALL IN for next year’s event.”  (Read more about Derek Herrera’s story here.)

Leslie Mayes, Chairperson for SeaCliff’s Tee It Up for the Troops explained what makes their event unique, “Players enjoyed pre-tournament activities after checking in with their 1-1 personal concierge who walked them through the check-in process and schedule of events. An opening observance and tribute to our nation and military, complete with ceremonial bagpipes and a T-34 aircraft flyover, kicked off the golf tournament with ABC news anchor, Phillip Palmer, serving as master of ceremonies. During the tournament, the pin flags are manned by active duty military and  long drive Pro Kyle Warren, who’s Navy father recently passed away from exposure to Agent Orange, could be called upon to hit a big one down the middle.  A Meet

the Heroes Reception featuring cocktails and a silent auction followed golf and the day ended with a dinner, speaker Sue Pollard, National President for Gold Star Moms, and live auction.”  When asked what inspires her to Chair this tournament, Leslie added, “When you see who you help…all the wounded veterans on property and military organizations that need our help… we do it for them because they are protecting our freedoms and we need to give back to them.”

SeaCliff’s first Tee It Up for the Troops event was started by Mark Mayes, Leslie’s husband, in 2011 with the help of Retired Air Force Lieutenant General George Muellner, both SeaCliff members. Mark, President of the California Chapter for Tee It Up for the Troops, had this advice when asked why the event is so successful. “We are super fiscal with our money and no one gets a free ride. Everyone pays to play…except for our military… each warrior is sponsored. We also get our volunteers very engaged and we make it fun for them…it’s their tournament.” What keeps Mark coming back each year to help with the event? “I have several faces in my mind right now… one wounded Marine looked at me and he thanks me with tears in his eyes for helping the warriors. I’m getting chocked up just thinking about it. We do it for the warriors and it’s just very rewarding,” Mark said.

This year’s event honored Veteran Zach Martinez, who after rallying for a permanent memorial (Patriot Point) on the bluffs of Huntington Beach with the help of SeaCliff Tee It Up for the Troops, passed away from an illness. SeaCliff Tee It Up and Serve It Up for the Troops raised money for 10 non-profit organizations this past year including larger groups such as Warrior Foundation Freedom Station and Fisher House and local non-profits like Operation Surf, Patriot Point and Junior Amateur Golf Scholars (JAGS).

The SeaCliff Country Club and its community all join to support this weekend event…even the kids! Near hole #7, you could find a lemonade stand run by 11-year old Maddie Rhoads. This was Maddie’s second year selling lemonade to the golfers and she has donated over $200 to Tee It Up for the Troops from her lemonade stand. This year, Maddie was joined by Daphne Mayes, Mark and Leslie’s five-year-old granddaughter, to help continue the family’s commitment to Tee It Up.  Thanks to Maddie’s caring heart, and the passion and hearts of all the volunteers and supporters of this event, SeaCliff’s Tee It Up and Serve It Up for the Troops to help military troops and their families is just a bit sweeter.

We are also pleased to share that as a special tribute to all that Mark and Leslie Mayes have done for Tee It Up for the Troops, they were presented with a “Patriot Award” for their years of commitment, passion and patriotism displayed in the Seacliff Tee It Up & Serve It Up for the Troops events.  Mark and Leslie, thank you for leading the way to help support Veterans and their families!

Thank you to Patriot Point, Operation Surf, Warrior Canine Solution, Fisher House Foundation and Warrior Foundation Freedom Station for all you do to support our warriors!

SeaCliff Tee It Up Charity Video featuring the various Veterans Organizations we work with. This, in part, is why we do what we do! Tee It Up for the Troops’ mission is to honor, remember, respect and support all those who serve(d) in the armed forces for this great nation.

Thank you to all who participated in this years 7th Annual Serve It Up For The Troops Tennis Tournament! 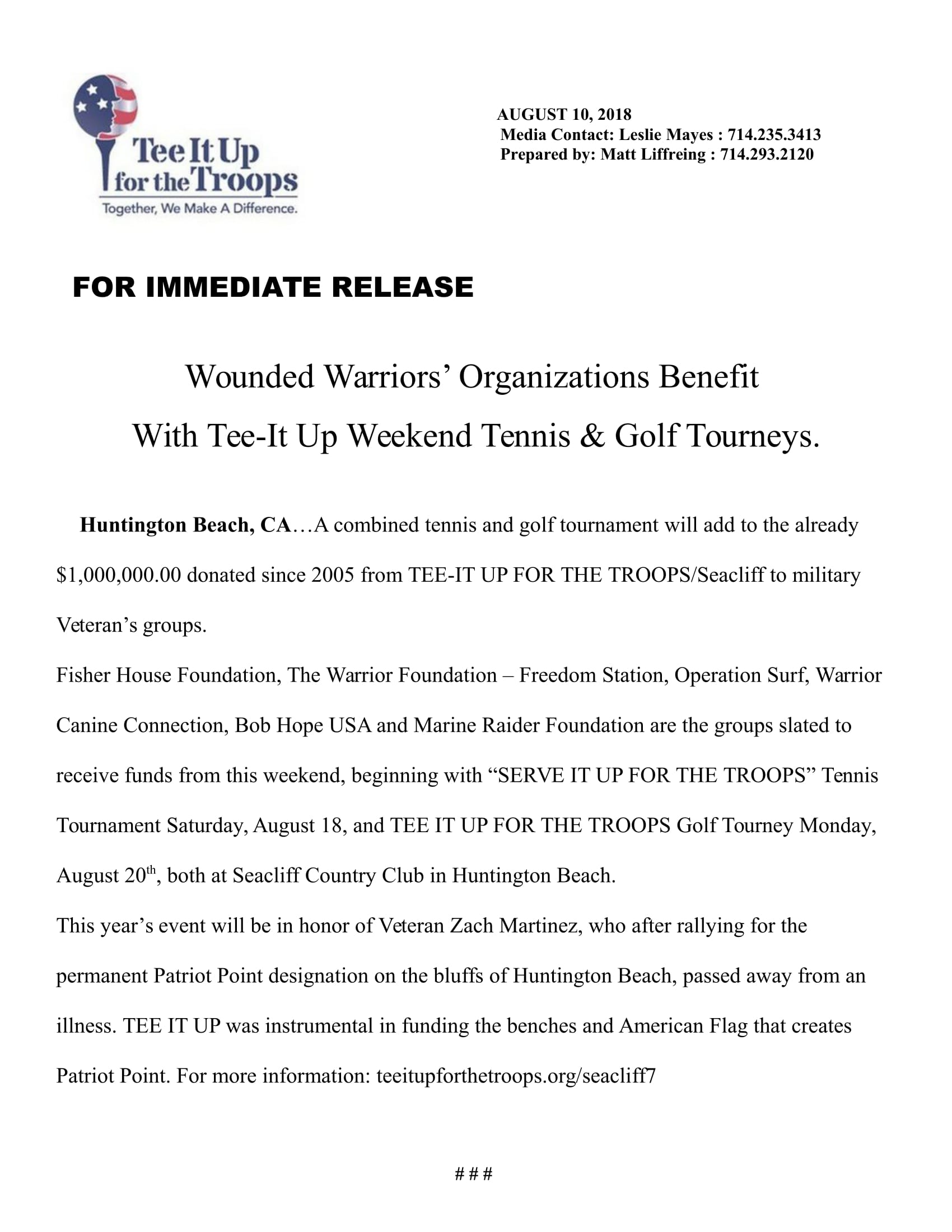